The reddit site /r/dataisbeautiful too often has fun visualizations, but improper meaning derived from them. Some time ago, there was a post showing political donations to congress from the telecom lobby:

Clearly the context is to try and show that there’s a lot of money being dumped into congress in order to affect their thinking on votes pertaining to net neutrality. Is that really the case, though? In order to compare, we’d need the donations to all senators and compare.

The reddit user reformatted their plot as such using data from all senators:

But still, the meaning here is lost. We see from the chart that there’s lots of senators, some receiving a lot more cash than others, but it’s hard to see if that has any effect on their votes at all. A better way to see if there’s any impact is to use a conditional inference tree and use their vote result as our response to model off of.

The data used for this exercise comes from this source, but for simplicity, I’ve included the raw table of data at the end of this post for ease of reproduction.

First, let’s just look at the distribution of cash split up by what the voting decision was: 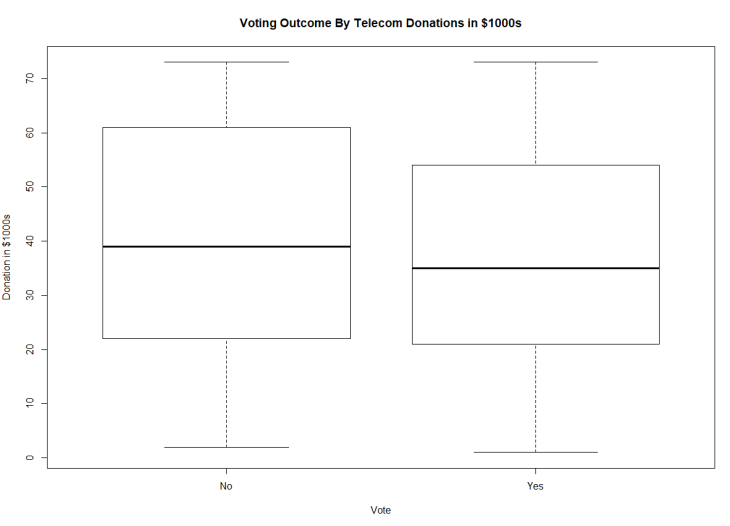 Now the above plot isn’t as sexy, but it’s a lot more useful. What we see is a distribution of data from the top down. The peak of the distribution in a box plot is the solid black line in the box, that’s where most of the data (the median) is. The interquartile range are the top and bottom of the box, and the whiskers outside the box show the maximum and minimum of those respective groups.

So what can we glean from that picture? Well we can tell that the yes votes had a lower median donation than the no votes. Oddly the opposite of what we were led to believe initially.

However, the data still has room to explore. How does political party come in to play in all this? The original thought was that there was a correlation between Republican votes and money. That doesn’t appear to be the case, in fact the opposite appears to be true. Seems like telecoms donating money to senators doesn’t necessarily dictate a vote in their favor.

We can extend this analysis with a conditional inference tree.

We read this plot as starting with the whole dataset, then splitting on party between D,I and R. For the D,I parties, we have a number of 48 data points (that’s what the n stands for), and a vector showing their percentage of no and yes votes respectively. In the case of the D,I party, we have a vector of y=(‘no’, ‘yes’). That means the D,I party had 100% no votes. On the other side of the aisle, we have n=52 republicans voting 96.2% yes and 3.8% no. That shows a much bigger impact of the vote than money does.

Sometimes the perceived beauty of the plot hides the real information of it. It’s always a better idea to show the meaning first, then gussy it up with all sorts of bells and whistles. If your visualization has no meaning behind it, you’re just window dressing.